Borut Pahor - (President of the Republic of Slovenia) »

 After Freedom: The Roads to Flourishing Edmund Phelp - (Laureate of 2006 Nobel Memorial Prize in Economic Sciences) »

"History Did Not End, But Freedom Will Prevail Every Time" Roza Otunbayeva - (Former President of Kyrgyzstan) »

"Freedom of Movement and Brain Drain in the EU- Addressing the Challenge at all Levels" Emil Boc - (Mayor of Cluj-Napoca, Romania; Former Prime Minister of Romania) »

The Growing Importance of Cities and their Role in defending Western Democracy Jan Vapaavuori - (Mayor of Helsinki, Finland) »

 Fall of Walls and Raise of Human Rights from Berlin to Pristina Mytaher Haskuka - (Mayor of Prizren, Kosovo) »

''The Wall: from a City Divided to Europe United'' Vojko Obersnel - (Mayor of Rijeka, Croatia) »

 Del otro lado, from the other side, the US-Mexico Wall  Vanessa Rubio Marquez - (Senator of the Mexican Congress) »

"The Freedom after Freedom" Sanita Osipova - (Vice President, the Constitutional Court of Latvia) »

 Is the Berlin Wall broken Down? The Challenges of Today Liudmyla Denisova - (Ombudsman of Ukraine) »

Zaza Tavadze - (President of the Constitutional Court of Georgia) »

If you Want Peace, prepare Justice - Confidence in the Judiciary, an Essential Value of the Rule of Law Augustin LAZAR - (Former Prosecutor General of Romania) »

It's not about the Wall. It's s about Freedom Lora Vidovic - (Ombudswoman of Croatia) »

 Reflections on the Economic Recovery Miracle: Eastern Europe after the Fall of the Berlin Wall  Marek Belka - (Former Prime Minister of Poland) »

Moses Cheboi - (Deputy Speaker of the National Assembly of Kenya) »

Changes after Socialism in the Comparative Perspective Leszek Balcerowicz - (Former President of The National Bank of Poland; Former Deputy Prim Minister of Poland) »

30 years after the fall of the Berlin wall, what prospects for our strategy and architecture of security in Europe ? Joëlle Garriaud-Maylam - (Member of the French Senate) »

Something is There, that doesn't Love a Wall Lena Nazaryan - (Vice President of National Assembly of Armenia) »

"The Military, an Agent of Cultural Diplomacy" James B. Peake - (US Army General; Former US Secretary of Veterans Affairs) »

Event Review: The Rise of Africa 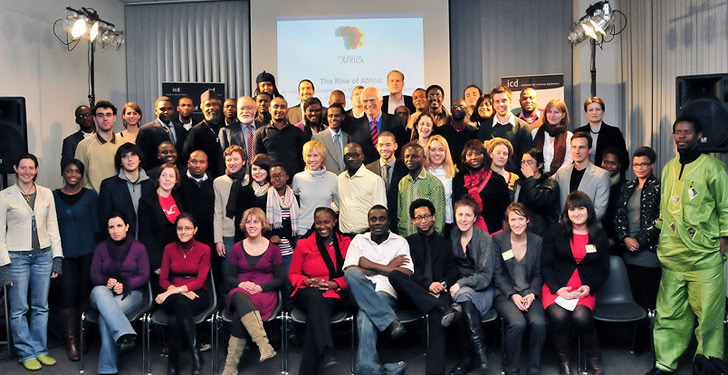 The Rise of Africa: An International Conference on New Strategies and Approaches to Governance and Sustainable Development in Africa
(Berlin, 21st  23rd January 2010)

The three-day Conference »Rise of Africa: A Forum for Young Leaders took place in Berlin from the 21st to 23rd of January 2010. The forum focused on the following topics: Africa's challenges and opportunities in meeting the Millennium Development Goals, with a particular focus on climate change, political and economic stability, and sustainable development; African markets as a target for foreign investment, and the impact of such investment on African development. Cameroon will be considered as a case study. The involvement of international organizations and corporations in Africa and their influence on the continent's development and economy; and the importance of cultural diplomacy and soft power in strengthening relations between African nations and within the nations themselves. Forum speakers included leading figures in current European and African political circles, members of academia, individuals from the non-profit sector, and members.

Thursday, 21 January 2010: The conference started with lectures introducing the topic of cultural diplomacy and New Strategies and Approaches to Governance and Sustainable Development in Africa, and the costs and benefits of aid versus the development strategies of trade on the African continent. The participants also took insight from Ambassador Nyaphisi on how cultural diplomacy can aid in the development of Lesotho and the Southern African community in general.

Friday, 22 January 2010: The second day of the Rise of Africa focused specifically on internal African Issues, such as corruption and Foreign Direct Investment. A highlight of the day was Transparency International founder Dr. Peter Eigens speech; it focused on the need for good governance in order to spur development in Africa.

Saturday, 23 January 2010: The final speeches of the conference solidified the importance of cultural diplomacy as a tool to enable trust between nations and peoples, often bringing them together in development. A Leadership Initiative Workshop followed the closing speeches, where the young leaders were given the opportunity to present their ideas for future initiatives to foster sustainable development in Africa. The lasting effect of this workshop was to create a network of young leaders to inspire inter-cultural dialogue.

"Nigerias Role in Building a United and Sustainable African Continent"

"The Potential of Cultural Diplomacy to Assist in the Development of Lesotho, SADC, and Beyond"

"Africa in the Middle: The New Scramble Africa" (Panel Discussion)

"The Next Generation of Africa"

"Good Governance, Aid vs. Trade and the Role of the Private Sector in Securing Africas Future Success" (Panel Discussion)

"Building Africa Together: The Role of the Diaspora in the Development of Africa"